Low (when shot the Darts)
Medium (when dropped.)

The Crossbow is a key item in Granny that was added in Version 1.1. Its primary and only use is to fire Tranquilizer Darts. It is located in the Weapon Cabinet in the Secret Area's Top Floor, which is accessed with the Weapon Key.

The Crossbow appears to be a home-made style crossbow. The frame, arc and the trigger is likely made from metal. It consists of a wooden handle to finish the design's touch. The arc also has a high-tensile bowstring attached to make it work properly.

The player holding the Crossbow

The player holding the Crossbow with a Tranquilizer Dart

Granny getting shot with the Crossbow. 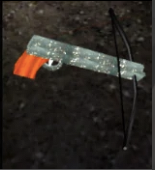 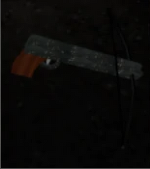 Crossbow in Mobile Version
Add a photo to this gallery
Retrieved from "https://granny.fandom.com/wiki/Crossbow?oldid=43824"
Community content is available under CC-BY-SA unless otherwise noted.