All places (except tunnels) in Granny's House in Nightmare Mode.

Spectral Rats are a Hazard that was added in Version 1.1 of the PC variant of Granny and in Version 1.6.1 of Mobile version. They are one of the new "Pets" that were added in that update. They only appear in Nightmare Mode, so you do not have to worry about them at all on all other normal modes. They appear at random, so beware where you step. Sometimes, stepping on a rat is inevitable, as they may block a narrow way. Just be sure to know Granny's position before intentionally stepping on it. They are just like creaking floors, but even if you don't move, a rat can still run into you.

The Spectral Rats are the fourth most dangerous character in Granny (first being Granny, second being Spider, third being Crow), as they temporarily hinder your vision, and in that process alert Granny.

Upon getting bitten by a Spectral Rat, you will receive a short stun, similar to the Jail Ventilator, but much shorter.

During the stun (bite) from the Spectral Rat, the screen will shake violently, the borders will get splattered with blood, and the edges of the screen will be drastically darkened, and a lens distortion effect will be applied to the entire view.

The Spectral Rats will commonly walk for a short period of time, and then they will stop and rest. During the "resting", the Spectral Rats will bob up and down, but nothing much else will occur. The "resting" can also take place on Staircases and in Hallways, which will block the path from the Staircase or Hallway. This will result in time being wasted and your frustration, as a Spectral Rat that is on a Staircase will block the path, and it is only very rare to walk past one and not get bitten (check out the end of this paragraph). You would have to risk a bite in that situation, which would alert Granny. The Spectral Rats will completely ignore the Player’s presence and will not chase them, but if they wander into the Player or the Player steps on them, they will bite and begin running away. In some very rare instances (most commonly in the Staircases and Hallways), you can get extremely close to a Spectral Rat, but it won't bite. It is still unknown why this occurs, but is assumed to just be a simple glitch.

The Spectral Rats are able to wander through closed doors, and in some cases they even appear to have the ability to teleport between multiple rooms.

The Spectral Rats CANNOT be stunned or killed by any weapon such as the Crossbow, the Shotgun, the Pepper Spray, the Sauna, the Car and the Freeze Trap. This rule also applies to the the Unstable Flooring and Granny herself, as those things that knockout and or kill you cannot influence the Spectral Rats either. The Bear Traps (and the flesh variants) also apply, as Spectral Rats cannot interact with them.

The Spectral Rats cannot access the Secret Tunnel, the Hidden Tunnel, the Attic Tunnel. Those are total safe zones. Most of these examples are due to the size of the Structure, but logically, the Spectral Rats should be able to access those areas. They will mainly wander around the Ground Floor area, while sometimes going through the Upper Floor and Attic. They will never go into the Secret Area Bottom Floor. They can also teleport.

A brief time after "Spectral Rat Attack", you can see blood covering the edges of the screen, and the Spectral Rat is running away.

The head of one of the Spectral Rats.

The cloud left behind by the Spectral Rats. 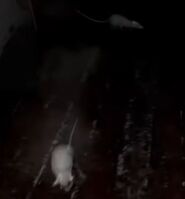 Two Spectral Rats, as seen from the Kitchen.

The Rat stuck with the Engine Part
Add a photo to this gallery
Retrieved from "https://granny.fandom.com/wiki/Spectral_Rats?oldid=39030"
Community content is available under CC-BY-SA unless otherwise noted.